The 1939 New York World's Fair Had An AMAZING Poster 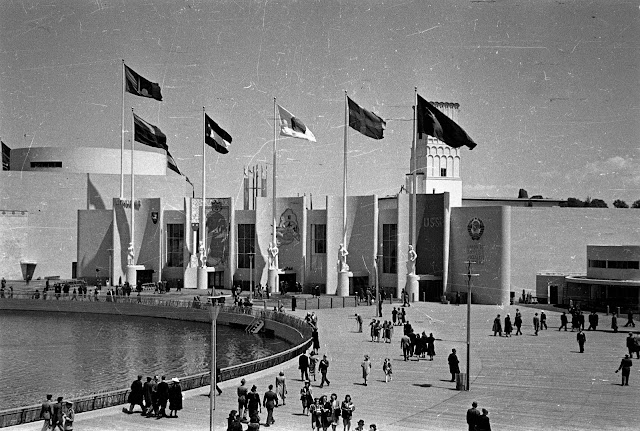 Oh sure, there were others. The very first fair, the 1851 London Great Exhibition was the start of it all and images from that fair continue to percolate in pop culture, most recently in the animated Japanese movie Steamboy. Perhaps the grandaddy of all pre-modern World's Fairs, the 1893 Chicago World's Fair outshone them all in sheer scope and grandeur. It and the 1933 Chicago fair were significant enough events to represent two of the four stars on the Chicago flag. More recently, the 1967 Montreal Fair saw fifty million people visit... when Canada's population was barely over twenty million.

The 1939 Fair, though, is the image that comes to mind when almost everyone thinks of the World's Fair. This was perhaps unavoidable since it straddled the line between the industrial age and the modern age. Gears and steam would give way to transistors and nuclear reactors. Telephones and electricity were becoming increasingly common, and the age of international travel was just getting off the ground. The old world became the new world; a large world became small; and this gives the NY fair an air of modernity that still rings true. More so than any event previous, this was the birth of the modern age — the baby's first breath.

The 1933 Chicago Fair had the Graf Zeppelin announcing the recent ascension of Hitler, much to the citiy's consternation. Then the 1936 Olympics happened under Hitler's watch in Berlin and featured the first live telecast.

They were all but previews — the quickening of a new world soon to be born.

The 1939 fair would open in peacetime, and close in the shadow of World War II, ushering in six years of utter destruction — the most cataclysmic redistribution of power and influence to ever happen. In that half decade, we gave birth to the future. A twisted, malformed baby, that has perhaps never grown terribly pretty, but birth it we did, and in grand fashion.

Aiding the NY Fair in its immortality was drama inherent in its creation. Perhaps the organizers saw history being made around them, or perhaps they just got lucky, because the NY Fair's entire theme was The Future-ture-ture-ture. Modern design, grand architecture bordering on caricature, impossible science, powerful nations butting heads, all seemingly jockeying for positions in history itself. Even the marketing of consumer products — an integral part of the fair's philosophy — that caused so much hand-wringing on the part of the scientists who were involved, predicts the era of extreme commercialism that would rise after the war and in which we live today. One can almost imagine the Apple pavilion.

Precisely because the fair was such a specific statement, it has a romance that lives to this day. The personality of the fair, as opposed to just concomitant events like the war, defined an era in a way that only the 1851 London Exhibition previously did. It was about aspiration, dreams, and pushing humanity to its limit. Happening as it did during a time of unprecedented social, political, and economic upheaval, it was always destined for greatness. It was epic.

It seems entirely apt that an epic fair would have an equally epic poster. Modern. Angular. Bold and visionary. The poster was 100% modern. There wasn't a hint of classical theory or perspective in its creation — just as with the fair itself. I have printed this poster and recreated this poster. Altered it, analyzed it, and augmented it. I love it. 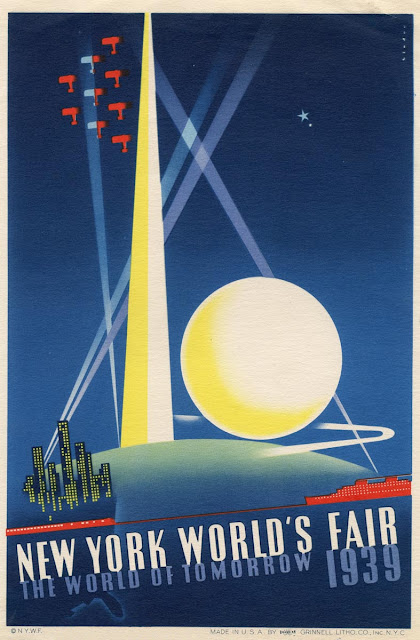 And to wrap this whole thing up nicely, a video of film made during the fair, and then a video of modern activity at the remains of the fair, set to Aimee Mann's Fifty Years After The Fair, which is conveniently about New York fifty years after the 1939 fair.