I have read a number of posts on minimalism. I assume that it is becoming trendy as a sort of reaction to the explosion of crap that happened as broadband penetration in the United States really took off after 2006, thus allowing websites that were positively overflowing with images, sound, and interactive twiddly bits.

One general theme that annoys me is the assertion that minimalism should never be an aesthetic choice; it should be a functional choice. I think that this is total hogwash. An aesthetic choice is communicating something about you or whoever for whom the design is happening. If I am designing a website for a clothing company who sells all of their clothes in stark, warehouse-like settings, I choose minimalism for no other reason than it looks right when compared to the company's retail outlet.

A good designer uses any concept for any reason. It is the very definition of flexible construction.

That said, any concept works best when applied over all elements of the design. For example, a website may use a minimalist aesthetic, and that's great. The website is best, though, when that minimalism extends to the structure of the website as well. Anything else is unbalanced and at odds.

This is because any sort of design philosophy can naturally spring from ideals. If I want a website to be functionally as simple as possible, a minimalist aesthetic will naturally arise from that endeavor. It must. Any aesthetic gew-gaws will impact usability because the people visiting the website will be forced to process, interpret, and interact with those ancillary elements.

I mention websites only as an example, but this can apply to anything. Imagine a product package. Instead of just making "a pretty box," we approach the box by inquiring what is necessary of the package. First and foremost, we want people to know what is in the box from a great distance. We want the box to stand out from other boxes. And we want the box to be appealing. Those are the only things required. 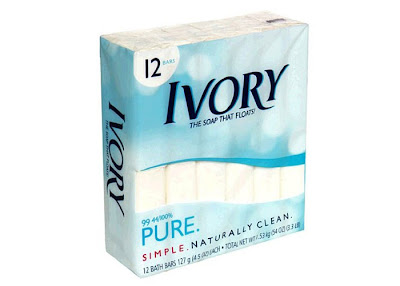 To exemplify this I look to the recent redesign of Ivory Soap, which perfectly illustrates minimalism in practice. Their old logo, in the grand scheme of things, was not overly intense. In the mad crush of gradients, colors, and pictures on other brands, its simple blue background, faintly hinting of bubbles, and black "Ivory," was positively spartan. Their redesign, though, is a masterpiece of minimalism. People can see the box from a great distance. It tells them everything about what's inside. And the overall package design is light, airy, modern, and attractive. It runs the risk of appearing like store brands, but the Ivory name is so well-known that I think that it overcomes this deficit.

Look at the various details removed. The logo is a simple, solid white. The shadow is removed. The background image, when after being compared to this version is revealed to be pointless, is gone. The various font colors have been removed, with only font weight left to add complexity and dynamism to the package. Truly, the red "simple" on the old package made no sense. The only further detail would have been moving the number of bars and the weight details to the side of the package. Thus reducing the front of the package to the absolute fundamentals.

This bold simplicity, where the, as Leo Burnett put it, inherent drama of the product is put front and center, extends to the advertising with this simple-yet-colorful advertising campaign. 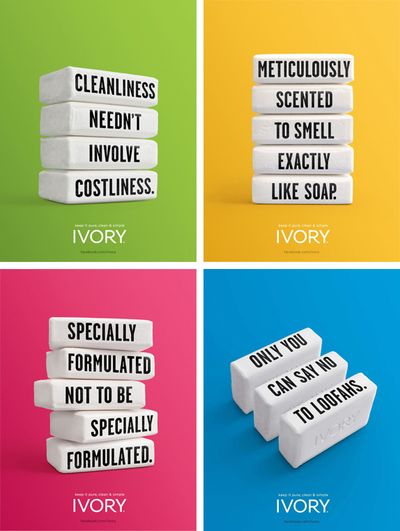 Each image essentially has one color. When the images gel together as people are exposed to them all over the course of a campaign, it becomes a vibrant variety, giving life and complexity to the product even while the fundamentals of any given ad are simple. The most important element of the design that is illustrated by these ads is that they weren't just using minimalism for functional reasons; they did it for aesthetic reasons as well. They wanted to communicate "simplicity" through the very structure of the package and ads, and not just the poster content, but it's also just pretty. The colors are bold and memorable, but they are nothing more than attractive colors.

Minimalism is at the core of everything that I do, but I recognize that much of it simply "speaks" to me. Yes, I can intellectualize it. I can philosophize about it. I can build up some conceptual framework from which the design direction might spring. But, in the end, it looks good to me. That is fundamentally aesthetic.
Posted by Aaron Martin-Colby at 5:20 PM