Moving Brands has released its complete rebrand of HP. And it is amazing. The sheer scope of the branding effort is awe-inspiring. There is the usual compliment of ridiculous "associations" between some principle and some end choice, such as logo positioning and whatnot. Branding firms love to make it seem like they are operating on some fundamental concepts as opposed to "gee, that looks good." The brand presentation for Pepsi's new logo became almost legendary for this foolishness.

I can understand why HP wanted to rebrand itself. Public perception of the company is very low, and while everyone knows them, no one cares. The issue that I see is at the core of branding: a brand is not just a public presentation, it is a synergy of company, product, and image. HP's image has always been good. Their logo is perfectly iconic at this point, their advertising is high-quality, and they haven't commoditized their brand into a pile of shit like Dell.

That said, their products are cheap, their design is questionable, and their customer service is awful; truly, all of the things to which people attach brand significance are below par. For example, in customer service, HP usually places at or near the bottom in every survey that I can find. Likewise, anecdotally, my worst experiences with technology have all been HP products.

The recent kerfuffles with in-and-out CEO's, WebOS, and the first-we-don't-now-we-do PC division drives home that HP is not a company that will be capable of producing the quality of product and experience that will be worthy of this excellent re-brand. They are, in fact, incompetent and are succeeding simply because the massive machine that is HP will naturally keep churning until a major market shift happens.

But that is neither here nor there. What we are here to discuss is the rebrand.

UPDATE: The below video has been reactivated by MB. I hope to see the rest of the site come up, soon.

UPDATE 2: Moving Brands has reactivated some of their HP work on Vimeo. Many of the videos have been re-cut to exclude the unused logo. The original video is still on YouTube, though. 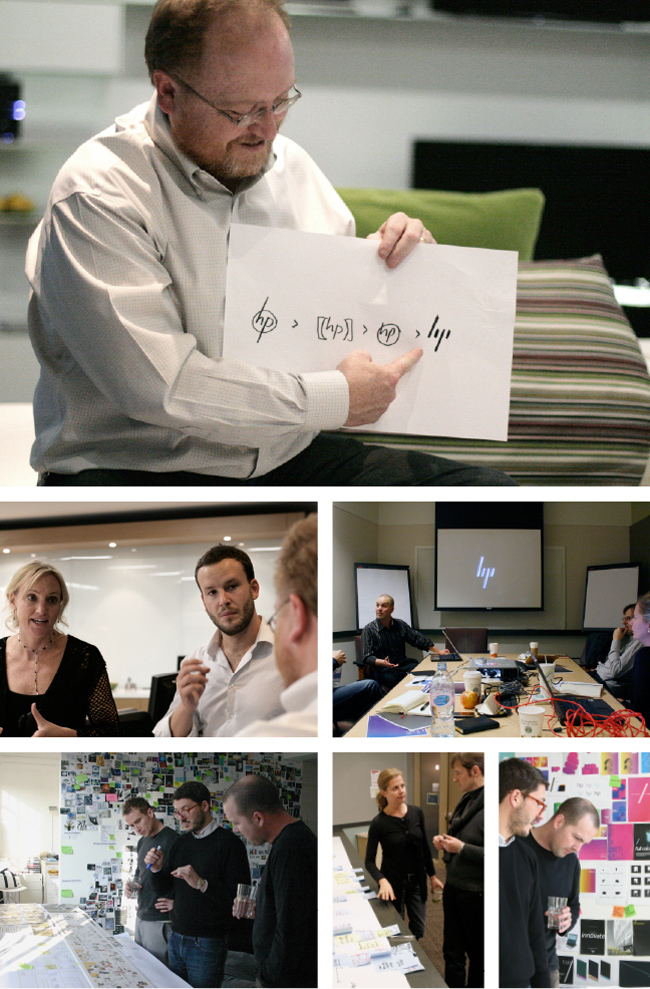 The sheer amount of work that has gone into this project is impressive. Even more impressive is the cohesive nature of the work. HP is a company with multiple personalities, and this goes much of the way to at least giving it a single personality. Moving Brand has posted a detailed work-up of the entire, three-year process and if it doesn't earn them significant kudos from you, I don't know what will. (UPDATE: MB has taken down presentation, apparently at the request of HP, which doesn't surprise me. HP's resistance to using this new branding only serves to make them look more incompetent.) 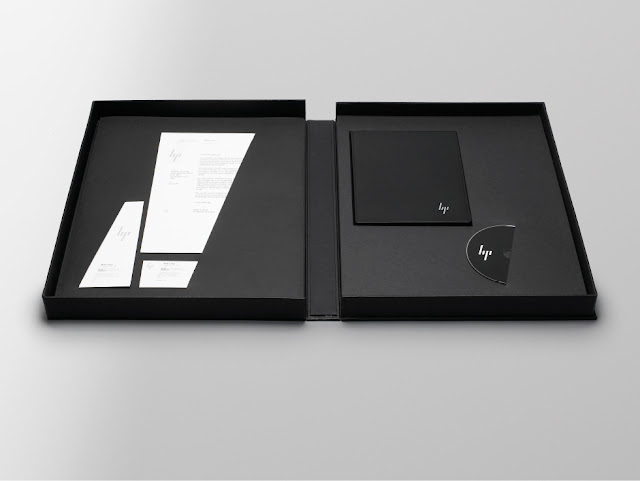 The thirteen degree angle used as an identifier is good and provides energy and a sense of motion to everything to which it is applied.

I do have what I think is a fundamental concern. The loss of the container shape, the circle, reduces the depth of the image. There is one-fewer vectors for communication. Its identifiability is thus reduced. This is certainly not an insurmountable issue; HP has more than enough marketing muscle to ingrain the image quickly into the public eye. This is still a problem that should be ideally avoided. Similar logos is an unavoidable consequence when a logo jettisons one of the primary identification carriers, the circle, and relies on basic shapes in a basic arrangement.

I think the biggest philosophical issue that I see is that this logo is very modern. In fact, I think that it is modern to a fault. They argue that one of their goals was timelessness, but the fact that the above logos show how incredibly trendy this look is, and the fact that nothing like this existed forty years ago, confirms that it is not timeless, it is modern.  The original logo has a genuinely timeless, organic quality to it. It is obviously just two letters and a container. That is fundamentally timeless. Applying a modern gloss to an old logo is fine. UPS did it. ABC did it. Apple did it. It works.

And speaking of apple, does anyone else find it funny that nearly every computer being used by the branding team is a Mac?

In deference to those who constructed this, I'm sure that they spent a lot of time with representatives from HP and made the conscious decision to go this modern, even if they don't want to admit it. No element of this is an accident. I still think that it is a mistake. If it was any other company, I likely wouldn't feel this way, but HP's logo is, essentially, perfect. Polish it. Manipulate it. Attach to it. But leave the core alone. 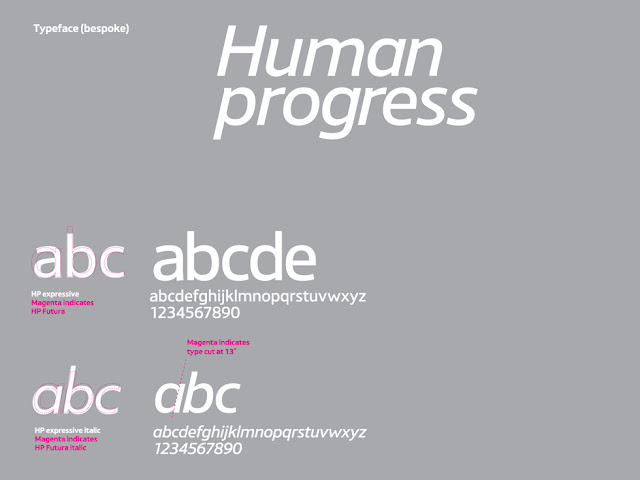 Since the full rebrand will not be implemented, we have some placeholder steps, including this custom typeface and an integration of the thirteen degree slant into videos, presentations, and print. It is a nice, energetic addition to HP's existing brand.


HP Identity and Design System from Moving Brands on Vimeo.

The overall implementation is excellent. HP is taking a brand personality that few other companies have. Their look is glowy, ravey, polished, and electronic. It looks high-tech, modern, and positively hip. It is here where I am totally fine with this look. Apple has refined beauty. Lenovo has rigid professionalism. Dell has shit. And all of the Taiwanese brands have desperate Apple copies. I think that the only aesthetic not being used that could be is an appliance-like aesthetic.

Again, though, the excellent implementation only highlights that HP itself is not polished, modern, and positively hip. They are a giant, soulless company run by fools. People will buy HP products and expect a certain experience and not get it. If anything, it's better to be faceless, because then people don't expect anything.

People go into an Apple Store expecting Apple. People go into a Best Buy and see an HP product, they like the package, or design, or marketing material around it, or maybe even the screen saver that's playing, but their experience with the brand exists in that moment. If that moment is good, for whatever reason, a sale may take place. People's experience with Apple exists in much more than simply the moment of product consideration.

That can be a very profitable place to be, though! Anonymity has value just as a strong brand does. Look at Acer, Asus, Toshiba, HTC: these are nearly faceless companies, yet they sell billions in product. In fact, a brand can be a burden in that a company is then forced to live up to whatever image that brand makes. HP should avoid that burden.

This brand is better than HP's current brand. But HP is still HP, and that is what they need to fix.

UPDATE: All of the videos and content has been removed from MB's website at the request of HP. I will leave the videos posted here, just in case HP decides to stop being stupid.

YET ANOTHER UPDATE: An HP representative has sent a letter to Under Consideration's Brand New website about the new logo.

"HP is one of the world’s most valuable brands and has no plans to adopt the new logo proposed by Moving Brands. HP did implement some of the other design elements shown in the case study."


I laugh in their face. HP has one of the least valuable major brands. People attach little to the name aside from recognition and omnipresence. It is like ABC or CBS. Those brands have almost no value aside from their ubiquitousness. HP needs to stop kidding itself.

EVEN MORE UPDATES: HP CEO Meg Whitman has, after announcing poor finances, made statements about HP "rebuilding credibility." What was that about the brand being valuable?

Furthermore, an article has popped up on Business Insider discussing how HP appears headed for catastrophe.
Posted by Aaron Martin-Colby at 6:58 PM