Paul Rand was famous for saying that a brand itself has no value. It only has value in its connection to the company and the behavior of the company. Thus, the IBM logo appears technological not because of the logo, but because it became associated with IBM.

I think that that is partially correct. It was certainly more correct in the past, but as the market has evolved, some of that truth has faded. As the market has become more crowded, the number of logos and brand constructions to which people are exposed has increased exponentially. This means that any brand that is created is already being interpreted through the lens of other brands.

As such, how a brand works and looks in comparison helps to determine initial interpretations. This is, of course, not a rule to be followed or a restriction of some sort. Instead, it is simply a state of the world that can be exploited as is, or specifically resisted to better stand out from the crowd. But still, it means that a logo and brand will have meaning and significance attached to it from the very beginning. It's why some logos look "professional" while others look "amateurish."

How is that determination made? By appeal to other brands.

I don't think that this is specifically positive or negative. In one sense, it means that a company has certain rules that need to be followed to allow for quick acceptance of a brand by the public. But it also means that a company can use these extant public perceptions to build an impression of being "corporate," "professional," and "big" without actually being that way. Basically, because of the huge history of brands, a company can fake being big.

This reality also makes skill in brand and logo design all the more important. A brand must follow conventions only insofar as it aids acceptance by consumers. The brand must then attempt to do everything else as differently as possible or risk being lost in the din of marketing. I think that this is why brand designs are so frequently as bland as oatmeal. Most designers do not have the skills necessary -- not for any fundamental reason, but just because they do not foster them -- and marketers believe that it is better to have a boring brand that follows all of the "rules," than a brand that strives to be something great but fails.

Rand's wisdom still holds up well after the brand has been introduced. Even though significant customer interpretation of your brand will happen before any interaction actually takes place, these interpretations can be easily changed by the actions of the company. What a company needs to be keenly aware of, though, is that the market has become such a loud goulash of other brands, that their presence has a large effect on any branding effort.
Posted by Aaron Martin-Colby at 4:26 PM No comments:

The USA has "rebranded" itself with a fancy new logo in an attempt to boost tourism. I don't really like it. I can say, positively, that it avoids cliche. There are no images of apple pie, or flags, or a giant eagle breathing freedom, or whatever else people seem to think America represents. Instead, its network of dots represent population numbers and the diversity of the American people. Nice sentiment. My only issue is how overused the dot matrix is, especially recently. Sometimes the dots are square, other times they are circular, but it's always dots. I think that the first company to do this was way back in 1972, when Banque Nationale de Paris rebranded itself with a logo that they stupidly stopped using after a 1999 merger.

This allows me to talk briefly about something very important. While I don't like the logo, it's still a good logo. There is nothing glaringly wrong with it. A logo acquires meaning and significance when it is paired with what it represents. Separate from that thing, a good logo can manage some representation of personality, which is ideal, but it doesn't specifically need to.

For example, What does the IBM logo say about IBM? Nothing. Or Target? Nothing. They are simply bold and identifiable. This logo is bold and, while generic and unidentifiable, is being covered by every magazine on the planet, meaning that it will be very quickly associated with the United States and all of the great things therein (ya'know, forclosures, unemployment, and the such).

If I was going to create a logo along that same theme (if I had been designing the brand, I would have almost certainly gone in another direction), I think that I would have done a patchwork design. It's a tad overdone, but not as much as the dots. I've also viewed America as less a scattered group of different people and more a patchwork; many disparate elements of different colors and textures, tied together under the banner of "America." In fact, I get a little teary-eyed just writing that sentence.

I was also going to make the logo much more geometric, but as I was working on it, I thought that the broken, prototype version of the logo looked great. Again, looking slapdash, but still complete. I see this as, again, more like the US than the actual logo, where we are thrown together, having grown organically and with little rhyme or reason. and sometimes we don't appear to be a coherent "thing," but somehow, we are.

I added bulges to all four sides, giving the logo a three dimensional appearance while also furthering the general theme or a country literally bursting at the seams with diversity and energy.

My logo retains a greater degree of uniqueness when cast in a single color, but still, the actual logo looks fine.

I designed various color schemes, including the basic, which looks like a quilt. Two others are quasi-impressionist takes on a city and the countryside.

Both logos do very well when downsized to extreme levels. My logo retains greater identifiability at smaller sizes, with the actual logo gelling into simply a faint impression of the letters USA.

Is my logo much better? No. It needs a lot of refinement to be production-ready. My philosophy is better though. There are very few logos out there that are as wild as this one, which makes it exciting, friendly, and identifiable.

Finally, I've uploaded the original direction I was going to take, with rigidly defines lines and geometric letters. It illustrates why I was immediately bored with the idea when I saw the excitement available from broken lines and an energetic, haphazard appearance.

Posted by Aaron Martin-Colby at 6:04 PM No comments:

I wanted to create an umbrella brand for all of the sites that I publish. It will help strengthen "me" as an entity separate from the various brands of the blogs, while also hopefully bringing increased attention from my more popular sites to the less popular ones. I am also hoping to generate business since I have a rather severe meth addiction that requires a great deal of money.

Importantly, I wanted it to communicate my design ideal of bold simplicity. Since I am a youthful, tech-oriented sorta' guy, I also wanted my logo to communicate a modern aesthetic (I tried to make it communicate how damned sexy I am, as well, but this was impossible). While a logo need not have anything to do with the title, I've always found that logos that are in some way associated with the word or subject to be the most memorable. Paul Rand is my philosophical foundation for this, who almost always had the logo and text intertwined.

I have always loved the symbol for infinity. It is simple, but carries an enormous amount of meaning and significance. I decide that it is a good starting point because the three letters of my name fit into the structure of the symbol very well. It is a bit overused in design these days, but as long as one moves far enough away from the starting point, there's not too much to worry about. 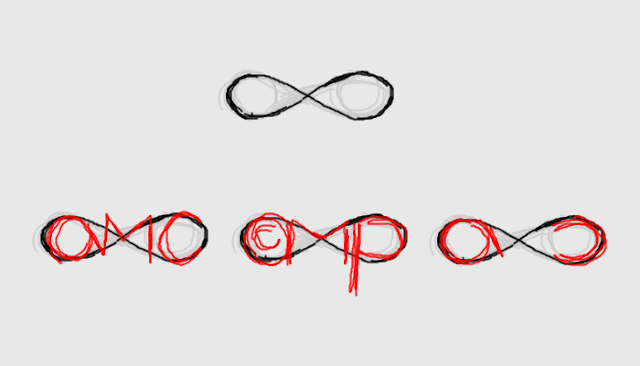 I experiment with the placing of letters a bit to find my footing and very much like the third one that moves away from the more literal placing of the first two by reversing the direction of the C. This brings me closer to the original infinity symbol, of which I need to be careful. 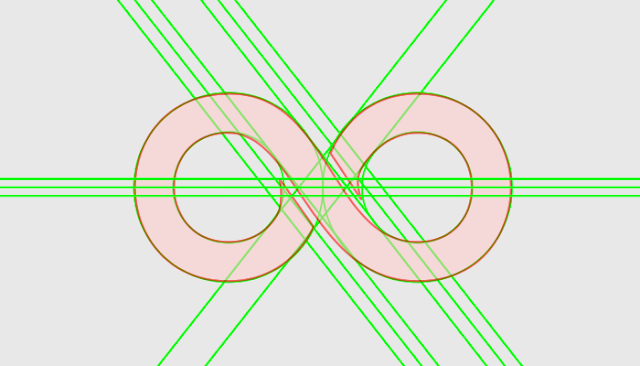 I lay out the logo and create the linked symbol. All three letters are represented in some part, but now I'm very close to the original symbol. This is problematic since I want the logo to only hint at the symbol for infinity, otherwise I am combating the public recognition of the symbol as it is, and not as it is associated with me. 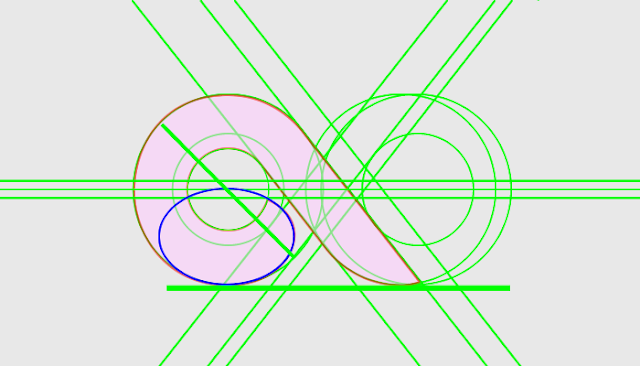 I know that I want to keep the A explicit. It is the first letter of my first name and it appears four times in my whole name, Aaron Donald Martin-Colby. The logo pruning also makes the image seem to naturally fall into an A-like shape. 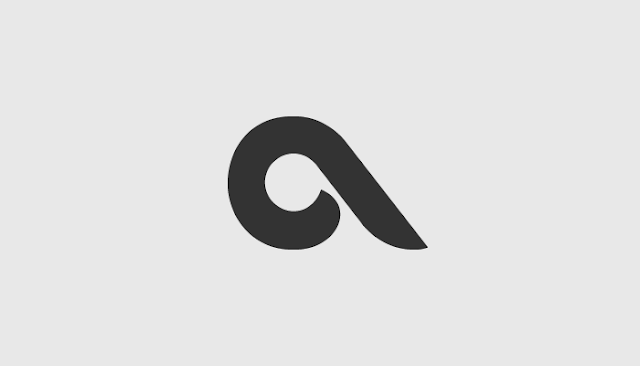 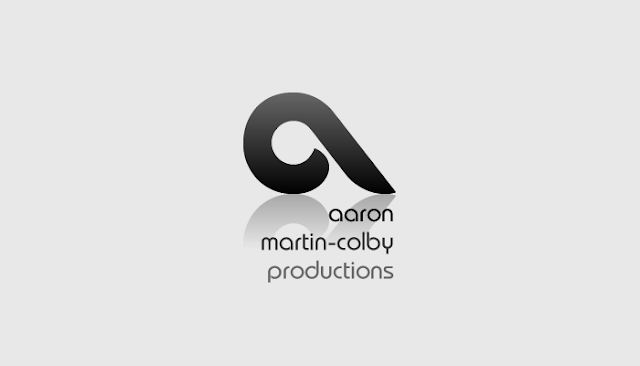 To complete the image, I choose a semi-generic futurey font that, when combined with the logo, gels into a unique whole.

Both text and logo are highly flexible, admitting of different colors and printing. 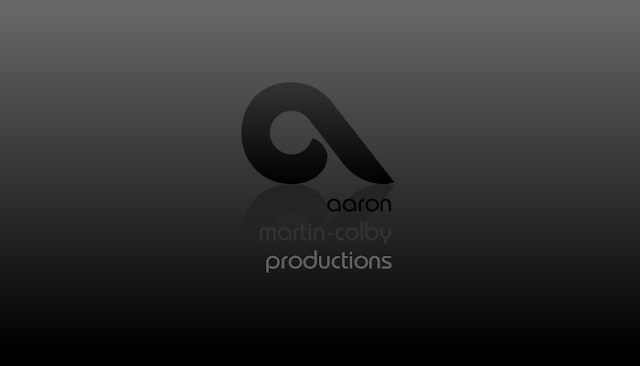 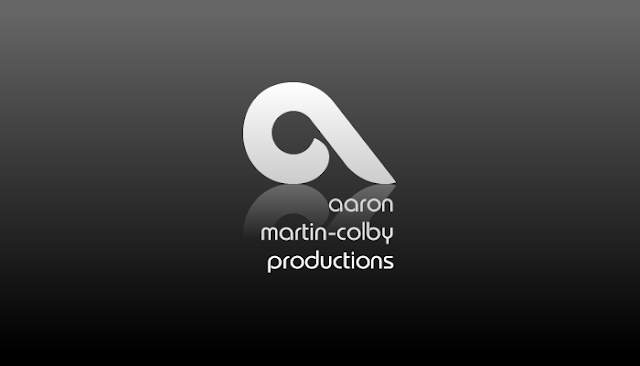 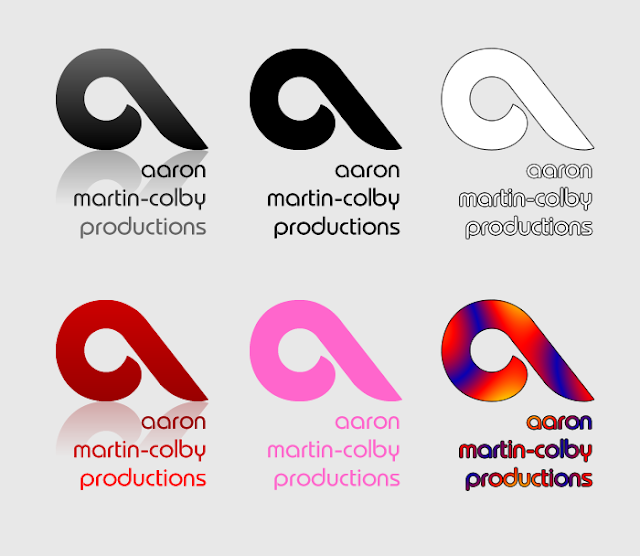 An initially well-designed logo frequently results in serendipitous benefits. Here, I did not intend it, but the logo works well as an element to a pattern, allowing me to subtly repeat the image throughout a page or document in a non-offensive way. 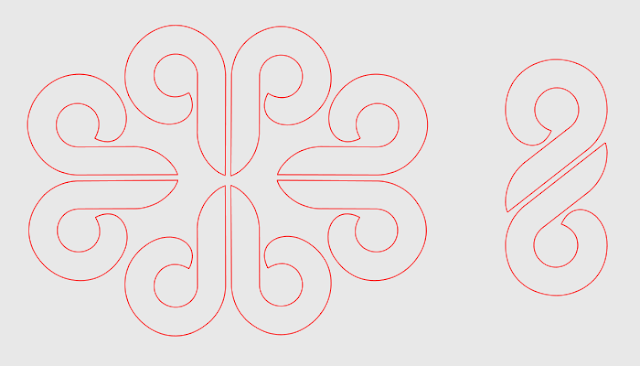 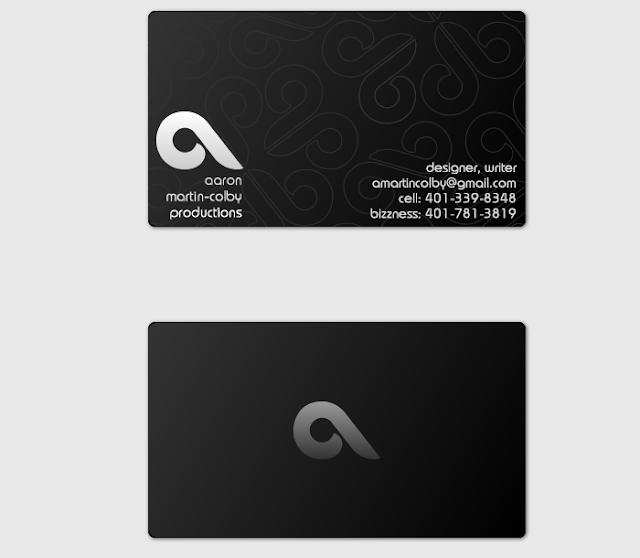 With such strong connection on one side, the logo can stand alone on the other side. I also allow myself a small touch of mirth with the silly, homonymous "bizzness."
Posted by Aaron Martin-Colby at 8:43 PM No comments: